This week we fixed some specific topics which were planned for the previous cycle. If anyone wants to contribute so see some of our “Builder wishlist” go there: Builder/ThreePointThirtyfive

Last time i had forgotten to mention the great work of our translation team which contributed various translations to Builder. Thank you!

For several releases now Builder allows to debug applications with gdb. However it was not possible to interact with gdb directly. This shortcoming got fixed now and there is now an entry to execute commands against the gdb process. 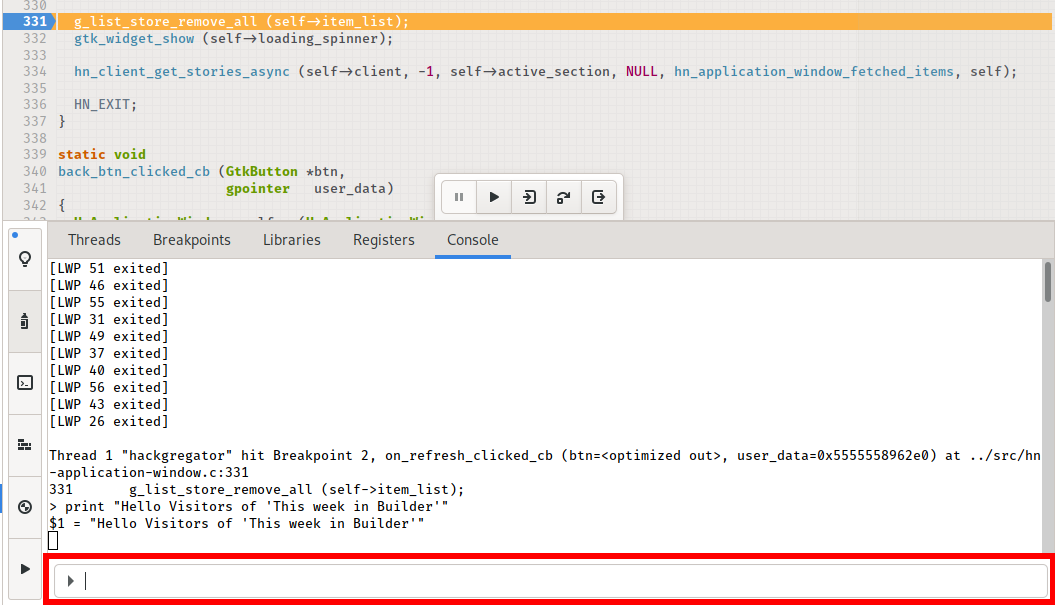 We are happy if you can test this feature to iron most of the problems out before the release this cycle.

Recently podman got major changes and announced V2 of the project. This changed also some APIs from the tool which broke our podman plugin. Harry to the rescue: he fixed the plugin and made it even backwards compatible. So you can use still the older version.

The Rust Analyzer Plugin got an alternative algorithm for resolving the actual workspace. Most of the time this would be the open project (as Cargo.toml can be found on the root of the project). But in hybrid projects where you maybe try to RiiR the Cargo.toml file can be found in a deeper folder. The idea now is to search for the Cargo-file in the root of the open project and if there is no file found trying to start the search from the opened Rust-file upwards till we reach the root folder again.

Christian tweaked some colours for the gutter for the new upcoming Adwaita colortheme (work in progress!)